Dunbar on top at British Amateur 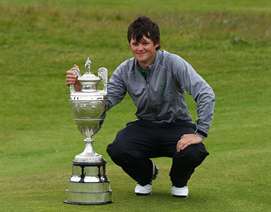 Irish eyes were smiling on Alan Dunbar at the British Am…

Northern Ireland’s Alan Dunbar (Rathmore) took home Europe’s grand prize when he defeated Austria’s Man of Steel, Matthias Schwab, in one of the tighest 36 hole matches in recent history to win the 117th Amateur Championship held at the links of Royal Troon.

In the end, it came down to a missed 4 foot putt that cost Schwab a chance to play in next year’s Britsh Open and Masters. Dunbar credited a recent lesson with his golf professional, Seamus Duffy of Castlerock, for his success.

Schwab, who will attend Vanderbuilt University in the fall on a golf scholarship, is no stranger to success on the big stage. He has been one of Europe’s top U18 players for the past 2 years and has already tasted success on the European Tour.

For his victory, Dunbar claimed the top prize of 15,787.58 points (90% of the total purse) and moved up to 2nd in the EGR Open Rankings just behind Daan Huizing who lost in his opening match to Craig Hinton.

Next up is the Brabazon Trophy – stay tuned!