Moore on Top at the McEvoy Trophy 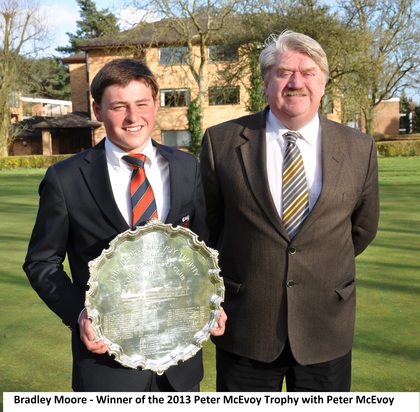 Bradley Moore continues to make his way to the top of the rankings with a win at the Peter McEvoy Trophy. The McEvoy Trophy is one of the top EGR U18 spring events. Located in the West Midlands of England, the Copt Heath Golf Club is the home of the McEvoy Trophy and attracts a top field every year.

Worthing’s Marco Penge(1998), is showing he is a name to watch as he continued his good form with a 6th place finish that included a fine 3rd round 67.

One of our goals at European Golf Rankings is to identify the rising stars of tomorrow. Former winners and participants of the McEvoy Trophy include Ryder Cup players, many European Tour regulars and Walker Cup stars. With the results that we have seen in the past two years from Jack Singh-Brar, Bradley Moore, Harry Ellis, Ashton Turner and Marco Penge they look to be names to watch!!