British Boys Set to Get Underway 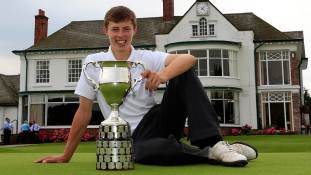 Germany’s Dominic Foos, still weeks away from his 16th birthday, enters the event as the favorite. Coming off victories in France and Germany at the U18s this season, Dominic’s handicap is a beefy +6.4.

Scotland’s Bradley Neil is a player to watch. He is a very strong ballstriker and has enormous expertise on links courses.

Others to look for include: Italy’s Renato Paratore, Guido Migliozzi, Luigi Botta and Edouardo Lipparelli. France is led by Alexander Daydou, Kenny Subregis, Pierre Mazier, Thomas Le Berre, Nicolas Manifacier and Mattieu Caron. Austria’s Robin Goger is always a player to watch for. Germany’s Max Bögel, Jonas Leibich and Marcel Ohorn are strong players who have had a lot of success this season. From the south, Portugal’s Gonzalo Costa and Spain’s Mario Galiano have both had strong seasons. For those who like and independent pick, Switzerland’s Jeremy Freiburghaus is a player to watch as well.