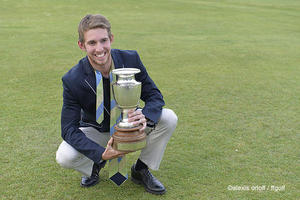 Germany’s Max Röhrig beat Kenny Subregis in a playoff to take home the top prize at the French Amateur. With Subregis sitting on 277 (-7), Röhrig needed a birdie on the final hole to force a playoff. He was up to the task and then birdied 18 again to secure the title.

Germany’s Benedict Gebhardt and France’s Leonard Bem finished joint third, four shots back at 281. The weather in France was windy and heavy rains continued to threaten play on day one and two. With almost perfect conditions on the last day, players had a chance to enjoy the links of Chantilly, one of Europe’s top courses.

In Wales, Englishman Toby Tree, fired a final round 64 to catch Gloucestershire’s Jamie Dick. In the playoff, Tree kept the moment going to secure the title. Both players finished on 202, five shots clear of England’s James McCormick and Michael Saunders. The players in Wales were not so lucky as the rain helped set record sales for umbrellas there. “It was a tough week in the weather, but they kept the course playable, it was the same for everyone and it was just a question of keeping under the umbrella as much as possible,” said 19-year-old Tree.

In Slovenia, Ryan Lloyd won the Slovenian Amateur with a fine score of 286 (-6) one shot clear of a charging Czech, Michal Pospsil and local favorite Tim Gornik. Pospsil birdied three of the last four holes but Llyod held steady with pars and secured the win. Lloyd’s father, Tony, is coach to Marcel Schneider, one of Europe’s young professionals. Tony sent his fellow club professional David Pimlett along to watch over his son as he gets a bit nervous when his son is playing:)

In two weeks, the British Amateur will be played at Royal Portrush in Northern Ireland. With over 17,000 points up for grabs, Ashley Chesters nearly 5000 point lead over fellow countrymen Nick Marsh atop the EGR Rankings is not safe. This is Europe’s top event with the winner getting an invitation to play in the 2015 Masters!