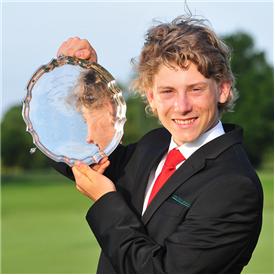 Denmark’s John Axelsen won the English Boys’ U16 Open Amateur Stroke Play (McGregor Trophy) held at the Radcliffe-On-Trent Golf Club with a four round total of 274 (-6). England’s Luke Northwood took second a whopping 7 shots back at 281. Third place went to England Oliver Clarke on 283. Right behind him were a trio of Europe’s top U16 players, Marco Penge, Matty Lamb and Coby Cartwright at 284.

This is the second straight victory for Axelsen who won the Danish International Amateur just two weeks prior. With his last two victories, Axelsen has amassed over 7800 points and has supplanted Marco Penge atop Europe’s U16 Rankings with 20,034.60 points. Penge, who at one point looked untouchable, is still within shouting distance at 18,974.60.

This is a great example of a young man who has a good head on his shoulders. After looking like he was cruising to victory at the German Boys, he made a triple bogey 6 on the par 3 16th in the last round at St. Leon and lost the title to Niklas Mattner. After the round, I ask John if he was disappointed with the loss and he said, “I will work hard to win again, and you know, I will be back”. With that statement, the Danish Terminator was born!

This is a busy time of the season and with the German Golf Federation, DGV, signing up with EGR to do their rankings, sleep is a luxury!!